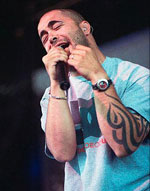 The Agency Group VP Ken Fermaglich has signed Staind to an exclusive booking deal for most worldwide markets, Billboard.biz has learned. The band had been booked by the William Morris Agency.

TAG will represent the band in North America, South America, Australia, New Zealand, Japan and any market in the Pacific Rim region. Rod MacSween in London represents the band in Europe.

Staind's current Flip/Atlantic album “Chapter V” has been on the Billboard 200 albums chart for 22 weeks, debuting at the top spot. Their single "Falling" is at number nine on Billboard's Mainstream Rock chart this week.

"I have a lot of excitement to represent this band and have been a fan of their music for some time," Fermaglich tells Billboard.biz. "I feel like they have made a great record and am looking forward to continuing to develop their career."