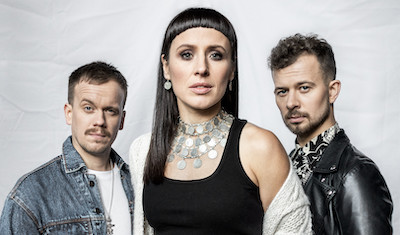 The 12th edition of the Tallinn Music Week (TMW) new music festival and conference is set to take place in Tallinn, Estonia on 27 - 30 August.

The TMW Creative Impact Conference on 28 and 29 August takes on a novel hybrid format, combining both digital and physical activities.

After being postponed from the original date in March due to coronavirus pandemic, TMW has spent the past months developing various scenarios on how to remake the upcoming event in such a way that it can feature performers across Europe, and provide a networking platform for both local and global industries and audiences.

TMW 2020 Creative Impact Conference at the Estonian Academy of Arts takes on a novel hybrid format, combining in-person gathering with digital participation and spreading the programme to a virtual audience. Special networking sessions and workshops will also provide an opportunity to establish contacts with industry representatives both on-site and digitally. Through the digital platform TMW can be joined also by the music industry representatives–both conference speakers and participants–from countries where restrictions on foreign travel are still in place.

Music Industry 2.0, Sustainable Development, Neighbours
This year has highlighted a range of challenges to the whole music ecosystem and forced us all to re-imagine a post-COVID-19 world by starting to look for the answers of tomorrow. The TMW2020 conference sets out to explore how we can rise to the challenge within the three central topics: Music Industry 2.0, Sustainable Development Goals and Neighbours.

Music Industry 2.0 agenda addresses the challenges for the music industry triggered by the pandemic and explores the ways for it to recover and to continue accessing new fields and making new connections. Will user-centric platforms and novel virtual experiences help the industry weather the storm? Or will it all boil down to the willingness to recognise the need for change, and the ability to lead change? More than ever before the topics of resilience and leadership must be addressed.

The conference is also taking responsibility to acknowledge that we all have unfinished work to do in realising the inequality and injustice that still persists in our communities. With the help of international initiatives like Keychange and ShesaidSo, problems faced by disadvantaged gender and racial minorities and stigmas around mental health will be tackled across panels and roundtables united by the Sustainable Development agenda.

Collaboration across boundaries and disciplines can solve complex problems. The Neighbours topic aims at mapping a dialogue with both our regional neighbours as well as with the music industry’s next-door disciplines. The notion of an increasing glocalisation will also be reflected in mapping local and regional cultures.

The newly launched TMW DigiPRO passes for 75 euros that enable full digital participation in the festival and conference are now on sale at the TMW web-shop shop.tmw.ee.

DigiPRO Pass includes online access to the live streams and recordings of the music festival and conference as well as to workshops, round-tables and speed meetings via Zoom platform. Additional benefits include access to the delegates’ database and the advertising possibility in the TMW newsletter. PRO Pass (previously named Conference + Festival Pass) for 175 euros includes all the DigiPRO options along with the possibility to take part in the festival in-person.

Conference Pass for 150 euros grants both in-person and digital participation in the conference.

Tallinn Music Week has also revealed an updated line-up with artists from Estonia, elsewhere in the European Union and the Schengen Area. In order to increase possibilities for the public to participate, while keeping virus-related risks as low as possible, some of the festival’s indoor events will be moved outside, and a large outdoor stage will be set up on the central square of the Telliskivi Creative City.

The 311.ee, Made In Baltics & Sony Music, and Viljandi Folk showcases have been moved to an open air stage at the Telliskivi Creative City, where up to 1,000 people can attend. On three nights, the outdoor stage will feature, among others, renowned Estonian folk acts Trad.Attack! (pictured) and Mari Kalkun, Finnish accordion experimentalist Antti Paalanen and Latvian indie band Carnival Youth.

Since the Estonian border was reopened in June for travellers without symptoms of illness arriving from within the European Union, from the Schengen Area, and from the United Kingdom, most of the previously announced artists will be performing at the festival. Due to current restrictions on travelling, the festival cannot host the previously announced artists from Russia, Ukraine, Belarus, Israel and Canada. The entire programme has been adjusted accordingly, and most of the artists who can not join the festival due to travel restrictions have been replaced with other performers. TMW is working on a solution to enable US noise rockers A Place to Bury Strangers to perform at the festival.

In total, 141 artists from 15 countries will perform at TMW 2020. Over 80 Estonian artists will make up the cross-section of the local musical landscape. Among others, the Estonian talent is represented by renowned folk acts Trad.Attack! and Mari Kalkun, jazz stars Kadri Voorand in duo with Mihkel Mälgand and Mingo Rajandi Quintet, electronic experimentalists Ajukaja, Mart Avi and Nikolajev, multiinstrumentalist Erki Pärnoja, funk-combo Lexsoul Dancemachine, and urban newcomers YASMYN and manna. Notable foreign performers at the festival include the shoegazers Joensuu1685 and the ambient jazz pioneer Tapani Rinne from Finland, Norwegian experimentalist Bendik Giske, Danish doom metallers Cabal, Latvian dreampop band Tribes Of The City, and the Hungarian troubadour The Devil`s Trade.

In addition to the open air gigs in Telliskivi Creative City`s main square, the music progamme will spread all over the creative city – from the Black Hall of F-Hoone and the Kivi Paber Käärid locale to the Fotografiska Centre, where showcase nights will also extend to the summer garden. The programme also reaches the Sveta Bar and Kauplus Aasia clubs in the immediate vicinity of the creative city, and the Kalju Baptist Church in the Kalamaja district. In the Noblessner Port area, three venues will host TMW showcase nights: the techno club HALL, the Nobel Hall of the Proto Invention Factory, and the Kai Art Center. Music can also be enjoyed in the open air in the HALL club’s summer pavilion Suvila and free daytime performances on the terraces and in courtyards across the city.