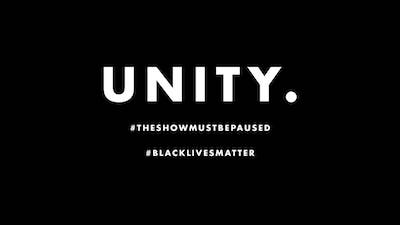 The show will be paused. At least, that`s the message coming from leaders and artists in the music business as part of a movement being referred to as Blackout Tuesday.

A Twitter account tied to the group appears to have been created on Sunday, amid a weekend that saw communities across the country protesting the murders of George Floyd and others at the hands of police.

In a letter explaining the effort posted to their official site, Thomas and Agyemang said it is "in observance of the long-standing racism and inequality that exists from the boardroom to the boulevard."

Artists like the Rolling Stones, Quincy Jones and Billie Eilish have said they`ll observe the day. A number of artists have also canceled listening parties or fan events in response.

Two record execs from Atlantic Records, Brianna Agyemang and Jamila Thomas, came up with the plan for a Blackout Tuesday on June 2nd.

Most of the world`s major music companies have joined in a campaign called #theshowmustbepaused to show solidarity with the black community in the wake of George Floyd`s death.

The Live music industry will stop and pause for reflection and involvement in community. Implicitly this in memory of George Floyd, and all victims of anti-black racism.