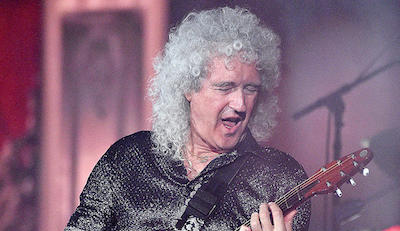 Legendary Queen guitarist Brian May revealed to fans that he recently suffered a "small" heart attack amid dealing with his previously reported "gardening accident".

May shared the following details via his website, "I thought I would tell my story here because it`s just a tiny bit kind of more intimate but I think it needs telling because people are kind of making up stories out there and I thought I`d tell you the truth about what happened.

"I told you that I had a ripped muscle. Now that was the way I was diagnosed and we thought it was like a bizarre gardening accident. I didn`t realise that was amusing really and I didn`t really, I kind of forgotten that anything to do with the bum, people finding amusing, so I got kind of pissed off with all these, you know, Brian May`s gets a pain in the bum, and all that kind of stuff.

"But, anyway, it turned out to be not really the case. I had an MRI and yes I did have a rip in my gluteus maximus and it`s so easy to make a connection ... gluteus maximus ... there`s a rip there so that must be the cause of the pain - end of story. Got a pain in his bum, and no, no other tests were done.

"Now a week later I`m still in agony - I mean real agony. I wanted to jump at some points. I could not believe the pain, and people were saying: `That`s not like a ripped muscle. You don`t get that amount of pain.` So eventually I had a another MRI but this time I had my upper lower spine and sure enough what we do we discover but I had, I had a compressed sciatic nerve, quite severely compressed, and that`s why I had this feeling that someone was putting a screwdriver in my back the whole time and it was excruciating. So finally we started treating the thing for what it was. I`d been putting the ice packs in the wrong place for 10 days or whatever.

"So that`s one side of the story and I`m a lot better now. I`m actually free of that terrible pain, which actually destroys your mind. I can`t believe what it does to your brain. I feel like it`s... I feel like I`m in the pain. It`s been appalling. Nothing if you have ever appreciated that.

"But in the middle of it the rest of the story is a little more bizarre and a bit more shocking really. Well I was shocked anyway. I thought I was a very healthy guy and everyone says you`ve got a great blood pressure, you`ve got great heart rate and everything and I keep fit on me bike and everything - good diet = not too much fat. Anyway I had a, in the middle of the whole saga of the painful backside, I had a small heart attack and I say small, you know. It`s not something that did me any harm. It was about 40 minutes of pain in the chest and tightness and that feeling in the arms and sweating and, you know, you kind of know, you`ve heard and, actually this is a heart attack, and cut a rather long story short, my wonderful doctor drove me to the hospital himself in his Corniche, and I went straight into what they called the `Cath Room`, I think, and had an angiogram. Now that`s the thing where they stick something in your wrist here and it goes all the way up to your heart and it can go into the arteries of your heart and find out what`s wrong and it can find out in a way that nothing else can - it seems to me, you know - nothing else can tell you what the angiogram can tell you.

"And they looked at me, because you`re conscious, and said: `Brian, I`m sorry this is a little more complicated than we thought. and we think we should come out of there and we should talk before we actually do anything rather than just sticking a stent in.`

"So that`s what happened and I went back to a hospital room. I was very lucky to be treated as an emergency case but I think kind of was an emergency, but they were very kind and we talked about it the next day and there was a lot of pressure because I actually turned out to have three arteries which were congested and in danger of blocking the supply of blood to my heart."