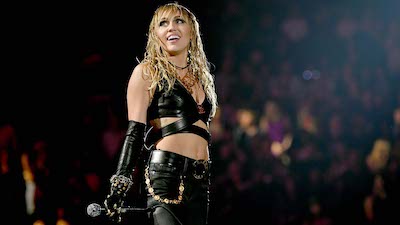 Miley Cyrus has signed with WME worldwide in all areas, she previously was with CAA.

The singer-songwriter and actress had vocal cord surgery late last year but is now back at work on her upcoming seventh studio album, She Is Miley Cyrus. The release actually will consist of a trio of six-song EPs, starting with 2019`s She Is Coming. In addition to that EP, Cyrus` activity last year included the single "Slide Away," the Charlie`s Angels collaboration "Don`t Call Me Angel" with Ariana Grande and Lana Del Rey and "On a Roll," which she performed as her Black Mirror character from the episode "Rachel, Jack and Ashley Too."

This summer, Cyrus is set to hit the festival circuit at Bottlerock, Bonnaroo and the Governors Ball.

Cyrus has come a long way since her young teen days as Hannah Montana. As the Disney Channel hit neared the end of its four-season run, she found success as a recording artist in her own right. A few months after the 2009 release of her quadruple-platinum single "The Climb" from Hannah Montana: The Movie, Cyrus dropped "Party in the U.S.A.," which went on to go seven times platinum. Her transition from Disney child star came with a radical image change, showcased on the 2013 triple-platinum album Bangerz on through the music videos for such hits as "We Can`t Stop" and "Wrecking Ball," which both went quintuple-platinum. She subsequently released the albums Miley Cyrus & Her Dead Petz (for free via Soundcloud in 2015) and 2017`s Younger Now.

Cyrus continues to be repped by Adam Leber and Tish Cyrus. Other major clients that WME has signed over the past six months include Matthew McConaughey, Angelina Jolie and Julianne Moore.

According to Hollywood Reporter