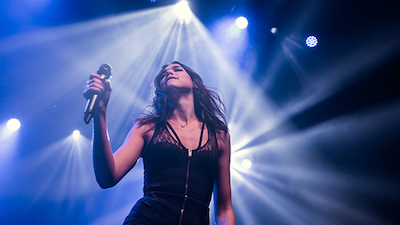 Dua Lipa is going on tour next year, in support of her upcoming album Future Nostalgia.

Not a single venue with a capacity lower than 11,000 is part of the routing, proving the status Dua Lipa enjoys in Europe. According to a statement from Live Nation Spain, Dua Lipa sold 15,000 tickets for the two Spanish concerts that will kick off the "Future Nostalgia EU Tour 2020" in just a couple of hours.

It doesn`t come as a surprise: Dua Lipa already sold out arenas on her last tour, "The Self-Titled Tour," which ran between 2016 and 2018.

Dua Lipa is another artists that exemplifies how organic growth, i.e. moving through the venue capacities at a comfortable pace, builds a sustainable career.

She said, the time on the road with her band influenced her new album: "I wanted Future Nostalgia to have a lot more of a live element, but mixed together with modern electronic production. My sound has naturally matured a bit as I’ve grown up but I wanted to keep the same pop sensibility as I had on the first record. I remember that I was on my way to a radio show in Las Vegas thinking about the direction for this new record and I realised that what I wanted to make was something that felt nostalgic but had something fresh and futuristic about it too."