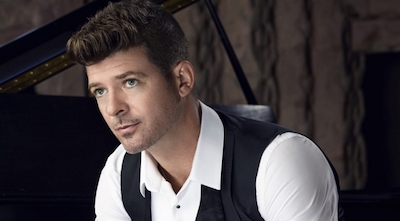 Robin Thicke has signed with ICM Partners in all areas of representation, the agency announced today.

Thick, who had a massive hit in 2013 with “Blurred Lines,” is also a versatile actor and entrepreneur.

“Blurred Lines,” featuring T.I. and Pharrell, sat atop the Billboard Hot 100 for 12 weeks and earned a Diamond certification from the RIAA.

In the last year, Thicke appeared on “Fantasia Presents The Sketchbook Tour” with Tank and The Bonfyre. He last toured as a headliner in 2014, averaging 2,805 tickets sold for a gross of $192,377 per show. Prior to that, Thicke toured in support of Maroon 5.

In 2019, he emerged with new music including the single “That’s What Love Can Do.”

“It’s about always believing in love to its fullest capabilities,” Thicke says in a statement. “It’s also about using love to overcome challenges and be a better father, partner, and man. ‘That’s What Love Can Do’ speaks to where I’m at. When you listen to my new music, I hope you feel the same way I do – which is rejuvenated.”

Robin Thicke is managed by Roc Nation and his attorney is Jaimie Roberts, and comes to ICM Partners from UTA.