Hanson brothers back on the road 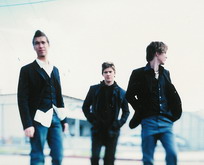 Hanson have lined up a nineteen-date U.S. tour behind their independently released new album Underneath.

Two shows, July 14th and 16th, are set for Hanson's adopted home base of New York City, and the tour is set to close on August 7th in their original hometown of Tulsa, Oklahoma.

Underneath is Hanson's first record in four years and the first release on their own 3CG label. "We just felt that 3CG was the right artistic decision for us," guitarist Isaac Hanson told Rolling Stone, "but it was the right business decision too. We just wanted to be in control of the way our content was delivered." The record debuted Number Twenty-five last week and has sold more than 50,000 copies to date.

The group showcased some of the new songs on last year's successful acoustic tour, but the new dates offer Hanson the chance to present them with all the proper bells and whistles. "It was a long time coming for this record," Isaac said. "It feels both fresh and like ancient history at the same time. We've heard some of these songs for years, but the audience hasn't had a chance to dive into it. But I think it shows the biggest evolution this band has made."