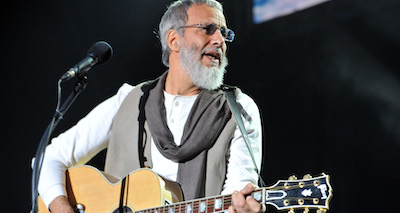 “Most of my songs were about the journey, the search for meaning,” said Yusuf, in an acceptance speech at the Songwriters Hall induction this summer. “Songwriting is such an amazing thing, it enables you to draw on all of life’s possibilities.” He was inducted by Dave Matthews, who performed “Father and Son” before giving his own speech, admitting he was nervous and saying, “This is the kind of evening that makes me want to throw up on myself, but I didn’t ask details because I’m such a fan of the man who wrote that song…. (Because of him) I felt like it was possible to be a songwriter.”

After his conversion to Islam in the late ’70s, the British singer-songwriter went only by his new name for years, but in more recent times has used both. His most recent album, “The Laughing Apple,” came out in 2017 and was nominated for a Grammy for best folk album. His signature songs from the late ’60s and 1970s include “Morning is Broken,” “Peace Train,” “The First Cut is The Deepest,” “Father and Son,” “Moonshadow” and “Wild World.”

Other accolades include receiving the Ivor Novello Award from the British Academy of Songwriters, Composer and Authors and a “Man of Peace” award at the World Summit of Nobel Peace Laureates.

Yusuf is managed by Yoriyos Adamos at Catch Bull.