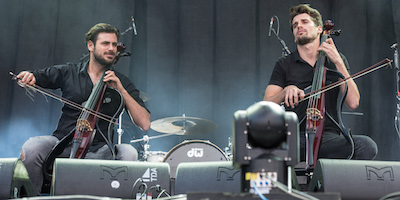 2Cellos, the Croatian duo of cellists Luka Sulic and Stjepan Hauser, has signed with CAA for representation worldwide.

Widely known in Asia and Europe, their repertoire includes classical music, film music pop and rock. In the U.S., they have appeared on “Glee,” where they performed Michael Jackson’s “Smooth Criminal,” “The Bachelor” and the 2013 Emmy Awards.

Signed to Sony Masterworks, 2CELLOS boast a co-sign from Elton John, with whom they toured performing at such venues as Madison Square Garden and the Paris Olympia. Other high profile gigs include the Queen’s Diamond Jubilee and the 2013 Emmy Awards.

More recently, their “Game of Thrones” medley with the London Symphony Orchestra racked up more than 33 million views on YouTube.

2CELLOS was previously represented by ICM. They are managed by Rocket Music Management and attorney Will Ashurst.