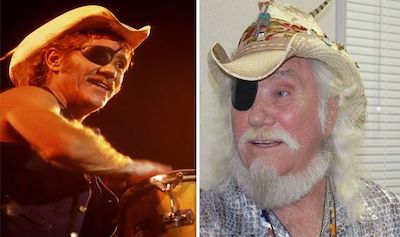 Dr Hook vocalist Ray Sawyer has died aged 81. He died “peacefully in his sleep” after a brief illness, according to his wife, Linda Sawyer.

Sawyer was a founding member of the Chocolate Papers, a trio from the American south that split in the late 1960s. After leaving the group, Sawyer decided he was “going insane from too much beans and music” and decided to pursue a career as a logger in Oregon. He got into a car crash en route and lost an eye.

After the accident, he vowed to return to music. He joined Dr Hook & the Medicine Show, the Alabama-based group featuring all the former members of the Chocolate Papers. Although Dennis Locorriere was the band’s lead singer, Sawyer’s eye patch and cowboy hat made him the group’s most distinctive member.

Sawyer sang back-up and played occasional percussion but took the lead on their 1972 song, The Cover of the Rolling Stone. The song included lyrics about how the band had not appeared on the cover of the then young rock magazine. A year later, the group scored their first Rolling Stone cover, when they were interviewed by Cameron Crowe.

The then unknown Bruce Springsteen opened for the group in Los Angeles in 1973. The band shortened their name to Dr Hook in 1975 and pursued a disco-influenced direction that lead to their greatest commercial success with their 1978 album, Pleasure and Pain.

Sawyer left the group in 1983 to pursue a solo career. In 1988, he was granted a licence to perform as Dr Hook featuring Ray Sawyer, and toured until 2015. He and Locorriere were estranged. In the wake of Sawyer’s death, he told Rolling Stone: “It does not erase the fact that we were once close friends and shared an important time in both our lives”.