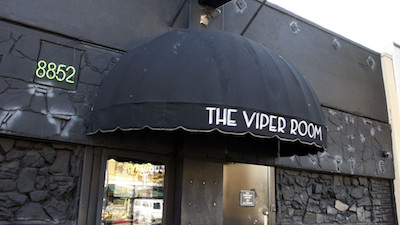 The legendary Viper Room, a rock club on LA’s Sunset Strip once owned by Johnny Depp and formerly home to high stakes poker games that included Toby McGwire and Leonardo DiCaprio and was the site of River Phoenix’s overdose death in 1993, has been sold and could be demolished to make way for luxury apartments or a hotel.

“There’s not a development plan in place,” Jim Cooper, a director at REM Finance Inc. of Scottsdale, Ariz., which represents the buyer — 8850 Sunset LLC, also of Scottsdale — told the Journal. “They’re looking to see what the highest and best use would be.”

The potential closing of the Viper Room could make it the second Sunset Strip venue to shut its doors since 2015 when the House of Blues was shut down and demolished in 2017 to make way for Sunset Time, an eight-story hotel and five-story condo building. The Viper Room first opened in the 1940s as the Melody Room, a jazz hot spot frequented by mobsters Bugsy Siegel and Mickey Cohen. It became the Viper Room in 1993 and not long after reopening, was the site of Phoenix’s overdose death on Halloween, 1993. The Viper Room remained a popular hangout in the 90s for Hollywood A-listers who also frequented venues like the nearby Roxy and Whiskey A Go Go.

The venue was home to high stakes poker games played by celebrities like DiCaprio, Ben Affleck and Matt Damon and popularized in the film Molly’s Game. Once Slipknot lead singer was arrested at the venue for kicking out a window in front of police. Counting Crows frontman Adam Duritz kept his bartending job at the Viper Room after his debut album August and Everything After went triple platinum (“the only people I knew in L.A. were the people who worked at the Viper Room, so that’s where I would hang out. It was fun,” he told USA Today), and the Pussy Cat Dolls had a long-running burlesque show at the venue

In 2001, Depp’s had a falling out with business partner Anthony Fox, who sued Depp but went missing just days before a jury was set to deliver what could have been a favorable verdict for Fox. Fox was never found, although police did eventually locate his vehicle. In 2004, Depp quietly turned control of the Viper Room to Fox’s daughter Amanda.

The venue was sold to Blackhawk Partners in 2004, and then sold again to Harry Morton, the son of Hard Rock Cafe founder Peter Morton in 2008 with plans to expand the Viper Room brand and create similar clubs in Las Vegas, Miami, Portland, Seattle, New York, London and Tokyo.

The sale comes during a period of change for the Strip, with new hotels including the Jeremy, the Edition, and Gwyneth Paltrow’s planned Arts Club being developed along LA’s most well known boulevard.