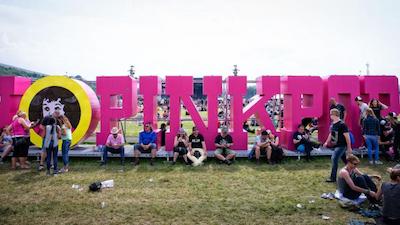 A man has handed himself in to police after a van ploughed into a group of people near Dutch music festival Pinkpop, killing one of them.

The 35-year-old man who died in the early hours of Monday was a local festival volunteer, organisers said.

Three other people were critically injured in the incident, hours after the three-day Pinkpop festival ended.

The 34-year-old man in custody is being held on suspicion of manslaughter and attempted manslaughter.

He was arrested 220km away in the capital, Amsterdam, after contacting police.

The incident took place shortly after 04:00 (02:00 GMT) in Landgraaf in the south-eastern Dutch province of Limburg. Police were unable to say whether or not the collision was an accident or deliberate.

The festival, attended by tens of thousands of fans, had come to an end hours before with a performance by singer Bruno Mars.

Many of the fans had camped in the area overnight and the collision took place close to one of the campsites a short distance from the festival.

The van had been driven away from the scene prompting a search across the border into Belgium and Germany. It was several hours before police said they had found the vehicle abandoned on the street where the collision had happened.

The organisers behind the festival said in a statement posted to Facebook that they were "deeply shocked" by the news.

The head of Pinkpop Jan Smeets said it was the first death in the festival`s 49-year history. "It`s really terrible, that such a great party should come to such an abrupt end," he said.