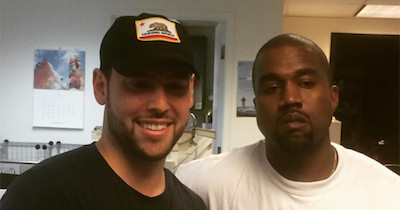 Kanye West has split from manager Scooter Braun, according to various reports.

Sources told Billboard that West made the decision due to a desire to “leave the traditional music business”.

Last month, West fired his longtime manager Izzy Zivkovic, who had co-managed the rapper with Braun since 2016. Now having jettisoned both managers, West is completely outside the traditional music industry system. Except for his recording and publishing deals, which seemingly remain in place. But apart from those, the rule book is in pieces.

Not that all ties have been severed though. Braun’s SB Projects company will reportedly continue to work with West’s Yeezy clothing brand. But that’s fashion, isn’t it? So that’s OK.

Elsewhere, West called in to Hot 97.1’s ‘Ebro In The Morning’ show yesterday, in order to have his right of reply over those claims made on the show that he is still a big Trump supporter. During the brief interview the rapper answered every question by saying that he’d “just called to say, ‘I love you`”. Although he did suggest that he’d do a fuller interview after having a private conversation with Ebro.