Arthur Awards handed out at ILMC 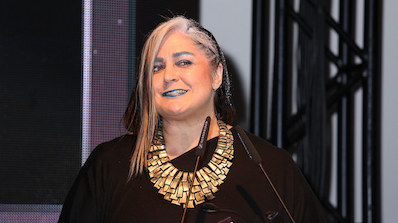 Last week, the Arthur Awards, the live music industry’s Oscar equivalents, was handed out during ILMC in London.

Taking place for the second year in the sumptuous surroundings of 8Northumberland, the Gala-ctic Dinner & Arthur Awards saw 350 interstellar travellers don their best spacesuits and set a course for an evening of mirth, merriment and glittering gongs.

On entertainment duties were host Emma Banks (pictured), who returned to captain the USS ILMC, and Whitney Houston tribute act Belinda Davids, who gave stirring renditions of ‘I Will Always Love You’ and ‘One Moment in Time’.

Also returning to the stage was Rock Werchter founder and 2017 Bottle Award winner Herman Schueremans, who presented the Bottle Award 2018 to ILMC’s founder, Martin Hopewell. Hopewell – who believed he would be, as usual, presenting the Bottle Award – was instead its recipient, and received a standing ovation from the audience (after tearing up the now-useless speech he’d prepared for the ‘winner’).

An emotional Hopewell closed the ceremony by paying tribute to ILMC’s former producer, Alia Dann Swift, and Dave Chumbley of Primary Talent, both of whom passed away in 2018.

Notably, all Arthurs for individuals – the awards for best assistant, professional services, new talent, agent and promoter – were won by women. The ceremony, on Thursday 8 March, coincided with International Women’s Day.

Venue (First venue to come into your head)
The O2, London (UK)

Production services (Services above and beyond)
eps