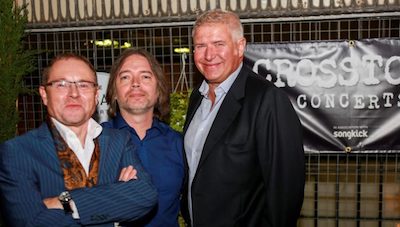 Crosstown Concerts has launched in the UK by long-time promoters Paul Hutton, Conal Dodds and Fraser Duffin, the company has set up offices in London and Bristol, and has already put on its first show: Massive Attack’s homecoming sell-out on the Bristol Downs on 3 September.

Crosstown has partnered with independent ticketing and concert discovery platform Songkick as part of its launch. Songkick will be the primary ticketing and technology partner across all Crosstown events.

Hutton celebrated the launch in a statement, while also referencing the ongoing problems with secondary ticketing sites, which have been headline news in the music and live industry since last year’s Waterson report was published.

“The most important people to us are the general public,” he said. “They pay our salaries by purchasing concert tickets, and for too long they have not been treated with the respect they deserve.

“One of the key areas we will be tackling is secondary ticketing, which has a huge negative impact on the UK live music scene. We are committed to tackling the problems surrounding the resale of tickets and providing fans with better–than–ever live experiences.”

Crosstown Concerts already has a number of shows lined up across the UK, with acts such as the Pixies, Kano, Seasick Steve, M83, PJ Harvey, Super Furry Animals, Savages, Explosions in the Sky and Billy Talent.