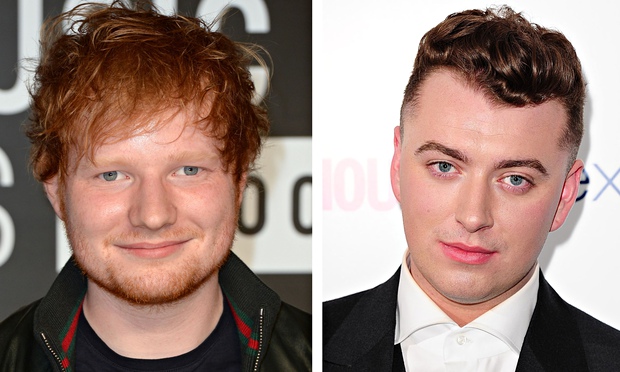 Ed Sheeran and Sam Smith helped U.K. recorded music sales stay above the £1 billion marker in 2014. The £1.03 billion sales figure is broadly in line with 2013 and represents a small 1.6% dip in retail value, according to an annual report from British labels trade body BPI.

For the first time since Official Chart records began the ten best-selling artist albums in the United Kingdom were all by British acts, topped by Ed Sheeran`s x, which sold 1.7 million copies – the highest yearly artist album total since Adele`s 21 in 2011. Nearly half a million of these sales (425,619) came in the last two weeks of the chart year, driven by Christmas gifting.

Outside of the artist albums chart, the soundtrack to Frozen was a massive seller in 2014 shifting just under 1 million units and never being out of the top 10 compilations chart, while Now That`s What I Call Music 89 was the third best-selling album of the year overall, with 954,417 copies purchased in just five weeks since its release in December, making it the fastest selling album of the year.

The year`s best-selling singles were Pharrell Williams` "Happy," which went 4x platinum in the U.K., followed by Clean Bandit`s "Rather Be" featuring Jess Glynne and John Legend`s "All of Me." Meanwhile, Mark Ronson`s "Uptown Funk" ft. Bruno Mars broke the record for the most streamed track in a single week, being played 2.5 million times in the last week of the chart year, ending Dec. 27.

In total, Brits listened to 14.8 billion audio streams in 2014, which equates to around 560 streams for every U.K. household and accounted for 12.6% of all music consumed in 2014, up from 6.2% in 2013 when the U.K. annual streaming total stood at 7.5 million streams. According to figures released Jan. 1 by the Entertainment Retailers Association (ERA), the U.K.`s streaming subscription business climbed 65% in 2014 to total £175 million in retail sales.

The knock-on effect was that download sales fell to just under 30 million albums, down from 32.6 million in 2013. Despite the drop downloads still accounted for 34% of all album sales in the U.K.

CD album sales in 2014 also fell to 55 million, down from 60 million the previous year. Vinyl sales totalled 1.3 million – the highest total in the U.K. since 1995 - with Pink Floyd`s The Endless River the year`s biggest seller. Together, CD and vinyl still accounted for 49& of all Album Equivalent Sales (AES) in 2014.

"The U.K. recorded music industry invests in a truly global business, as labels continue to find, develop, support and succeed with world class artists making world-class music," said outgoing BPI chairman Tony Wadsworth, who stepped down from the position at the end of 2014 after seven years in the role. "Record labels are also at the forefront of the transformation of the creative economy, and our businesses are starting to see sustained growth in a future which benefits creators and consumers alike," Wadsworth added.