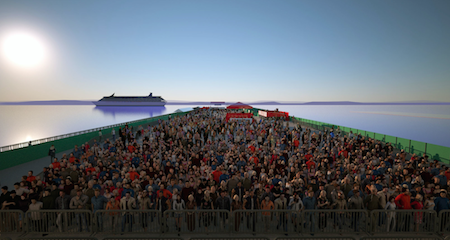 Live Nation and Harman International are partnering to debut a new outdoor venue in Manhattan, set to open in early summer at New York’s Pier 97 on 57th St. and the West Side Highway. The new venue will be named JBL Live at Pier 97.

The Fray (July 9), 311 (July 19), The Soulshine Tour with Michael Franti and Spearhead (July 21) and Robyn and Röyksopp’s Do It Again Tour (August 20) are the first confirmed shows.

The 6,000 capacity space will arrive just months after the closing of Roseland Ballroom, another iconic Live Nation venue, that played its last show on Monday with Lady Gaga. “As we close one important chapter in New York history, we’re starting another one, and that’s exciting,” says Jason Miller, president of Live Nation New York.

JBL Live at Pier 97 marks the second outdoor concert venue created in partnership with NYC’s Hudson River Park, following last summer’s Pier 26 in Tribeca, which was booked by Bowery Presents. Though the space hosted sold-out gigs from the likes of fun., OneRepublic and Tegan & Sara, complaints from neighbors in the surrounding residential buildings precluded a second season. Miller notes that Pier 97’s stage will face toward the water, and that its space is more than a block away from mostly industrial buildings. “What that does is allow us to go out and have fun and make loud noise and not disturb our neighbors too much because we’re not surrounded by residences,” he says.

The seasonal venue will likely remain open through late September or early October, weather-depending, and double as the latest showcase for JBL in midtown Manhattan. The audio-entertainment company recently opened its first New York City store a few avenues east on Madison and 54th Street, and saw the naming-rights opportunity as a way to drive music fans from the venue to the store, and vice versa.

“We weren’t necessarily looking for a venue or even a partnership like this,” admits Kheri Tillman, vice president of global brand development at Harman International. And indeed, the deal came together in the last two weeks, as brokered by MEC Access, a division of GroupM ESP, the world’s current largest media buying firm’s sports and entertainment division. “But we saw this as an opportunity to say JBL has had a history and heritage of providing state-of-the-art equipment at concerts and even venues like Yankee Stadium, and also educate consumers about our headphones and portables.”

Pier 96 will be situated mere blocks away from Bowery’s Terminal 5, a 3000-capacity indoor club, and will also compete for bookings with everything from Central Park’s Summerstage (5,000 capacity) to AEG’s Best Buy Theater (2,500) and Madison Square Garden’s the Beacon Theatre (2,800). Miller says the space is already being “readily embraced” by the marketplace, and hopes to further capitalize on the venue’s freshness. “One of the commonalities of New Yorkers is that people are constantly looking for something new and unique,” he says, “and the industry is asking, ‘How can I give my act a different look or something that’s outside the norm?’”