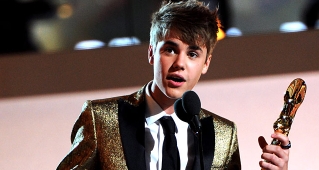 For second place there was a six-way tie between Rihanna, Lady Gaga, Usher, Taylor Swift, Mumford & Sons and Taio Cruz who each won three trophies.

The show also featured three special awards: Beyonce Knowles and Neil Diamond were honored with a Millennium and an Icon Award respectively for their career achievements, and U2 who won the Top Tour trophy.

The Awards' finalists and winners were determined by a combination of chart performances and social and streaming activity as chronicled in Billboard magazine and on Billboard.com during the eligibility period of February 28, 2010 through March 1, 2011.

The awards show took place at the MGM Grand Garden Arena in Las Vegas, Nevada in partnership with Chevrolet and the Las Vegas Convention and Visitors Authority (LVCVA).

This is the first year that ABC broadcasted the event and marks the first Billboard Music Awards show since 2007.

For a complete list of the winners go to Billboard.com