Ladies night at the Grammy Awards 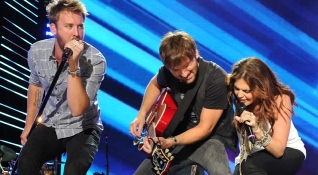 Country trio Lady Antebellum and pop star Lady Gaga were among the winners at the most prestigious ceremony in the music calendar, the Grammy Awards.

Lady Antebellum won five prizes, including song of the year and record of the year for their hit Need You Now.

Lady Gaga, who was carried down the Los Angeles event's red carpet in a giant egg, won three awards including best pop vocal album for The Fame Monster.

Jay-Z's haul included two trophies for Empire State of Mind, his duet with Alicia Keys, while Legend was rewarded for his collaboration with hip-hop group The Roots.

Eminem led the field going into the ceremony, with 10 nominations. But the star picked up just two awards - best rap album for Recovery and best rap solo performance for Not Afraid.

He had been tipped to win best album, but that award went to impassioned Canadian rockers Arcade Fire for their third studio album The Suburbs.

British breakthrough artists Florence and the Machine and Mumford and Sons also lost out in that category.

Stadium rock band Muse picked up best rock album for The Resistance. The trio, who performed at the ceremony, saw off competition from veterans Neil Young, Pearl Jam, Tom Petty and Jeff Beck.

But Young did triumph over Muse in the best rock song category. His track Angry World, from his album Le Noise, was also up against tunes by Mumford & Sons, Kings of Leon and the Black Keys.

"This is my first Grammy for music, and it's appreciated greatly," the 65-year-old Canadian legend said.

In other categories, Rihanna's Only Girl in the World was named best dance recording and US rock duo The Black Keys picked up best alternative album for their sixth release, Brothers, beating Vampire Weekend and Arcade Fire.

The ceremony at the Staples Center featured a string of flamboyant, star-studded performances and collaborations.

The show began with a tribute to soul queen Aretha Franklin, who is recovering from an operation, performed by Christina Aguilera, Florence and the Machine's Florence Welch, Jennifer Hudson, Martina McBride and Yolanda Adams.

Lady Gaga then emerged from her egg-shaped cocoon to take to the stage to perform her new single Born This Way.

Actress Gwyneth Paltrow joined a feather-clad Cee Lo Green Jim Henson's puppets to give a colourful performance of the hit single Forget You.

And Rolling Stones frontman Sir Mick Jagger earned a standing ovation for his debut Grammy performance, delivering a rendition of Everybody Needs Somebody To Love in tribute to Solomon Burke, who died last year.