Beyonce is queen of Grammy Awards 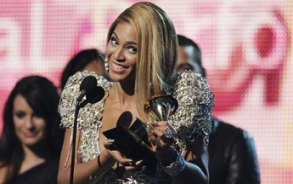 Starting the night with 10 nominations, her awards included song of the year and best R&B song, both for Single Ladies (Put A Ring On It).

The Black Eyed Peas, Jay-Z and Kings of Leon all picked up three trophies each, while Lady GaGa and Eminem won two.

Beyonce has set a new record for the most awards won in a single year by a solo female, and takes her career tally to 16.

Her other awards this year included best contemporary R&B album, best R&B female vocal for Single Ladies and best traditional R&B performance for At Last, which she performed at President Obama's inauguration.

She also won best pop vocal performance for Halo. Accepting that trophy, she said: "This has been such an amazing night for me and I'd like to thank the Grammys.

"I'd like to thank my family including my husband, I love you," she added, referring to rapper Jay-Z.

But she lost out to Tennessee rock band Kings of Leon in the record of the year category.

In a surprise result, the group's song Use Somebody won that prize, also beating hits by Lady GaGa, Taylor Swift and The Black Eyed Peas.

The song had also earlier been named best rock song - triumphing over tracks by heavyweights like Bruce Springsteen, U2 and Green Day - as well as best rock performance by a duo or group with vocals.

Michael Jackson's children Paris and Prince accepted a lifetime achievement award on behalf of the King of Pop, who died last June.

"Daddy was going to perform this year," 11-year-old Paris told the audience. "He couldn't perform last year. Thank you and we love you daddy."

The Black Eyed Peas won best short video for Boom Boom Pow and best pop performance by a duo or group with vocals for I Gotta Feeling.

And the group beat acts including Kelly Clarkson and Pink to win best pop vocal album for The END.

Fellow rapper Eminem, meanwhile, won best rap album for Relapse and best rap performance by a duo or group for Crack A Bottle, his comeback collaboration with Dr Dre and 50 Cent.

Lady GaGa took two awards - best dance recording for Poker Face and best electronic/dance album for The Fame. But she missed out on the major prizes.

The outrageous newcomer also performed an elaborate routine that culminated with her playing piano opposite Sir Elton John.

Other winners included Indian composer AR Rahman, who won two trophies for his soundtrack to the Oscar-winning film Slumdog Millionaire.

Film composer Michael Giacchino also won a pair, for best score soundtrack album and best instrumental composition for his work on the Pixar animation Up.