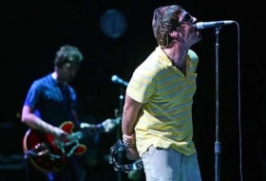 Oasis pulled out of their headline slot at the V Festival in Essex after Liam Gallagher contracted viral laryngitis.

The singer was advised by doctors not to perform, a statement said. Fans booed as Snow Patrol, who stepped up to fill their slot, mentioned their name.

Oasis were the main attraction on the line-up for many at the festival.

A statement from the band said: "After a year of being on the road this is the first performance to be lost to a band member's illness, so naturally we are all gutted."

The band performed at the V Festival's other site in Staffordshire on Saturday.

But Noel Gallagher wrote in his blog that he "didn't enjoy it one bit" and was not feeling well himself.

"Don't feel too clever," he wrote after the show. "Outrageous stomach ache. Feel like I'm coming down with summat.

"Might have to get the doctor out in the morning. Hope it came out of the speakers ok. Gutted. Oh well, there's always tomorrow."

The Essex performance was due to have been the last UK gig of Oasis' world tour, which began in Seattle 12 months ago.

The statement said Liam Gallagher was now "resting up" and is expected to be fit for their next show, in Paris on Friday.

Amy Winehouse made a surprise live comeback with The Specials at V
Fans gave a frosty reception when Snow Patrol singer Gary Lightbody paid tribute to "the mighty Oasis".

But the crowd sang along with gusto when the band covered Oasis classics Wonderwall and Champagne Supernova during their encore.

Psychedelic US rockers MGMT headlined a different stage in Essex on Sunday, opening with a version of Oasis' Live Forever and carrying a cardboard cut-out of the absent Liam Gallagher.

The cancellation came amid speculation over the band's future after Liam Gallagher admitted he and his brother Noel rarely speak, do not travel together and only see each other on stage.

"He doesn't like me and I don't like him, that's it," Liam told NME magazine earlier this week.

Oasis had to reschedule a tour date in Dusseldorf, Germany, earlier this year.