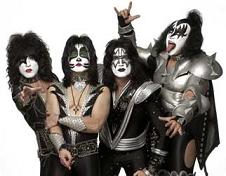 Kiss' upcoming U.S. and Canadian tour will be entirely routed based on demand at event-based social networking site Eventful, a first for a major act.

Fans will "demand" where Kiss will perform on their tour across the top-voted North American markets beginning this September. And in order to keep the competition fair for smaller cities, final site selection will weigh population size versus total votes. Today at 3:00 PM eastern, an official video announcement by the band's Paul Stanley, Eric Singer, Tommy Thayer and Gene Simmons began the promotion.

Fans across the U.S. and Canada can cast their votes at eventful.com/Kiss to have their town included on the Kiss 2009 North American tour. Fans will be able to vote, and check the tally of what cities are in the lead, 24/7 across the Web at the previous sites; as well as on Kiss' MySpace and Facebook, Ticketmaster's Kiss page, VH1Classic.com, and others.

When voting for their town, fans will have the opportunity to purchase pre-sale tickets prior to the general on-sale. In addition to joining in on the major campaigns launched by rock radio in each city, fans are also incentivized to create their own viral videos online, motivating their fellow residents to participate in casting votes for a Kiss show in their city. City-specific "best-of" compilation reels of these videos will be shown on jumbo screens at venues before each concert.