Phish reunite for US tour 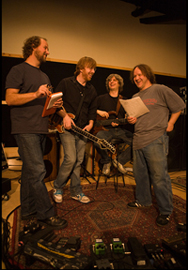 Phish have announced that they will reunite for their first tour in five years this summer.

Trey Anastasio and company will kick off their tour with two nights at New York's Jones Beach June 4 and 5. They'll then play dates in cities including Asheville, North Carolina and St Louis, Missouri before wrapping things up with two shows in Wisconsin.

The summer tour will be preceded by three shows at Hampton Coliseum in Virginia, which have already sold out. These will be the band's first concerts since August 2004.

Meanwhile, the band have also announced that they will release a live album titled 'The Clifford Ball' on March 3 in the US. This album features the band's entire performance at the 1996 festival of the same name.

The tour dates are: